With the tales of tapas built by the hipster bars spotting the streets of Toronto promising authentic tapas and sangria, there was a certain image of what tapas included. Imagine, for a moment, piles of roasted ham stabbed by a toothpick just to stay upright, little portions of the main offerings of the menu as taster previews, and stuffed olives fit to burst.

This is the image I, and certainly my mother, had when eating tapas in Madrid. Surely we’d be sitting there eating “authentic” tapas with the ability to return to Toronto and sneer at the Toronto tapas bars run by men with oiled mustaches and tattoos of geometric shapes. ‘This isn’t tapas you uncultured swines‘, we’d sneer haughtily with all the pompousness of a well travelled asshole, ‘I’ve been to Madrid and tasted real tapas!’ Then we would throw in a few random Spanish words for credibility.

Sadly this dream may be down the toilet because for the grandeur that tapas back home had, the tapas here are… well… toast.

I think maybe part of the appeal to the locals is how low brow it is, though I can only assume since I’ve yet to ask because of my appalling Spanish. I kind of get it, and I kind of don’t (the appeal, not the Spanish). In our first tapas meal, although I use the word “tapas” lightly since montadito is a sort of sub-genre of tapas, my mother and I arrived at 100 Montaditos hungry, jet-lagged, and just looking for something that resembled food after the scary pasta on Air Canada. At this point we had no idea what “montadito” even meant but hell it didn’t matter.

100 Montaditos seemed perfect. Young couples speaking Spanish were pouring out with tinto de verano in their hands, and you ordered on pieces of paper. Unpretentious, and oh look there were pictures of nice big sandwiches!

Except they weren’t. I think we should have noticed that no sandwich should cost 1euro and be expected to be large… but we were naive and ordered one each and a third to split because we were feeling positively gluttonous.

What is this? A sandwich for ants?

Mind you, despite the size of sandwich, they were pretty good! Especially the one with potato tortilla and garlic mayo. My mother was less impressed, but she also called it the “McDonalds of tapas”. (This one week with her has been filled with so many exasperated sighs that I’m afraid I’ll lose the ability to speak English all together and adopt exasperation as my mother tongue instead.) The tinto de verano may have also just beat sangria…. but just by a fraction.

After a long day of shopping to fit in and no longer look like hideous, Birkenstock wearing tourists, we stopped off at Taberna La Descubierta on calle de Barcelona at the recommendation of Paula, the young Venezuelan ex-pat working the desk at Hostal Gala Madrid.

Alright, real tapas at last. Bring on the undeserved foodie ego. The place had bright colours filling in where there lacked bricks and the bar was lined with local wines. It was dark, cozy, and all locals to the point after my mother successfully pronounced “caipirinha” the man stopped part way through giving us the one and only English menu and instead gave us the Spanish. We were not tourists, no, we were tapas experts with (Toronto) tapa experience, no English menu for us!

We ordered ourself some calamares a la romana along with a table tapas. I was (am) still having a hard time breaking my vegetarianism, especially with the Jamón ibérico leg sitting with a hoof pointed out straight like a ballet dancer right at my head, but regardless I looked on with some interest at the real tapas experience.

We ate the calamari with lemon and then waited as the tapas arrived. Except when our waitress laid them down on the wooden table I could see the moment my mother’s face fell in disappointment.

Each and every tapas sat on a piece of baguette toasted with olive oil. Even the ham and cheese were spread out extremely thinly. The cheese was semi-hard, sharp and delicious, and sure, even I appreciated how smooth the chorizo was but god damn so much bread. 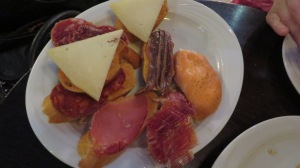 Atkins would hate this plate of tapas.

“How do they even stay thin here?” My mother asked as she munched on another piece of bread. “It’s all bread! There’s not a vegetable in sight and they are all skinny.”

It must be all the walking?

Now full of carbs, we walked back through Puerta del Sol, past the immigrants illegally selling knock-offs and pulling the strings of their stores into bags to run from the police, and the chirps of the men selling LED twirling copters. We bought alright lemon gelato from Palazzo along the road and walked back both a little disappointed.

This is not tapas everywhere, and I’m almost certain this is just two coincidences and that tapas in Madrid are different elsewhere. Or maybe that is just how “real” tapas are and I’m truly the uncultured swine who knows no better (this is admittedly most likely). Either way, I don’t want to eat another piece of bread for a few weeks. The sight of a freshly baked loaf alone makes me feel bloated.