After now having backpacked and travelled around for a few months I’ve started to notice a trend with some of the people I have been meeting in the hostels I have stayed at. There seems to be a lot of self-styled pseudo-intellectuals who fashion themselves as the modern Hemmingway and gods gift to world travel.

I first encountered this type when in my first few days I decided to buy one of the selfie sticks that a lot of street sellers were peddling all over Rome. I had met up with an old roommate from Madrid who had purchased one and encouraged me to do the same. It just made sense. I was travelling alone and wasn’t fond of asking people to take photos of me. This way I could take my own photos without bothering other people.

When I placed it on the table to show it, I was already apologetic because I had the inclining that these travellers were instantly going to think worse of me because just a few minutes before they had been touting how they were artists (with rather shitty sketches that they over explained their genius with) and had been to “gems” like Laos years before people knew what it was.

Boy, was I right. Instantly they were on me as if I was an antelope carcass and they were a pack of very hungry hyenas. They literally began to boo and whine pleas to make me put it away. They told me how disappointed they were in me, how shameful it was that I’d ever even considering buying one. I had had potential to be one of them until that moment. 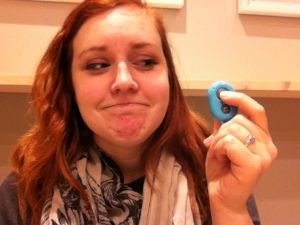 Here I am with the offending clicker.

I had just been demoted in the eyes of the other backpackers from “traveller” to “tourist”. Even though the words seem synonymous I quickly learned that to many people they aren’t. A tourist is someone who travels to different places to say they had been there (which made “country counting” pretty taboo amongst backpackers too), take cheesy photos, eat at tourist places, and then leave without having really discovered the culture of where they stay.

A traveller on the other hand is someone who takes time to immerse themselves into the cultures they are staying in, eat with the locals, and most importantly goes off the beaten pack in search of authenticity.

Although of course you will get a better understanding of the countries/cultures doing the aforementioned travelling there is absolutely nothing wrong with doing the first. How we decide to experience the world is completely up to the individual, and our comfort level with new situations/experiences varies between people.

The horrified look on the french backpacker, Louis, I hung out with in Bologna was similar when I stated that after expensive pasta was driving me insane I just wanted a cheap salad from McDonalds. There are all these faux pas that you must not break in order to retain your veneer of authenticity.

That’s what it all comes down to. It is the same thing that drives people to embrace counter culture, buy vintage, and listen to obscure music. Some people are obsessed with the notion of being authentic in a world that is largely commercial and “inauthentic”. They want to be able to say that they lived in a realm deeper than the average person, that they are somehow more in touch with the “real world” because they sketched David instead of taking a picture, ate Pho made by an Vietnamese grandmother instead of at a restaurant, and took their selfies without a stick.

I was legitimately told by one of the travellers in Rome that he honestly believed himself better as a human being than “tourists” because he was a traveller. He flat out told me he was superior.

And this is just my opinion, but I believe travelling like that, constantly in search of the “real” and “authentic” to be able to give yourself a sense of superiority and pseudo-intellectualism is no better than being “tourist”.

If you travel the world to better understand the people in it and still cannot learn to appreciate the diversity and to embrace the differences in people… then why bother travelling at all?

If you want to take photos with a stick or take artsy black and white photos of church steeples, that’s fine. All that matters is you are curious about the world outside your hometown and respect the people outside and inside of it.

As for me, I’ll keep my selfie stick thank you very much.

2 thoughts on “Traveller vs. Tourist – AKA “Your Selfie Stick Makes Me Sick””